The immune system By Jayne

Jayne Hopper DipCNM, BANT, CNCH Jayne says of herself; “I qualified as a Nutritional Therapist after completion of a 3 year Diploma at the College of Naturopathic Medicine and I am Registered with Nutritionist Resource.”

Thank you Jayne for sharing your insights with us. 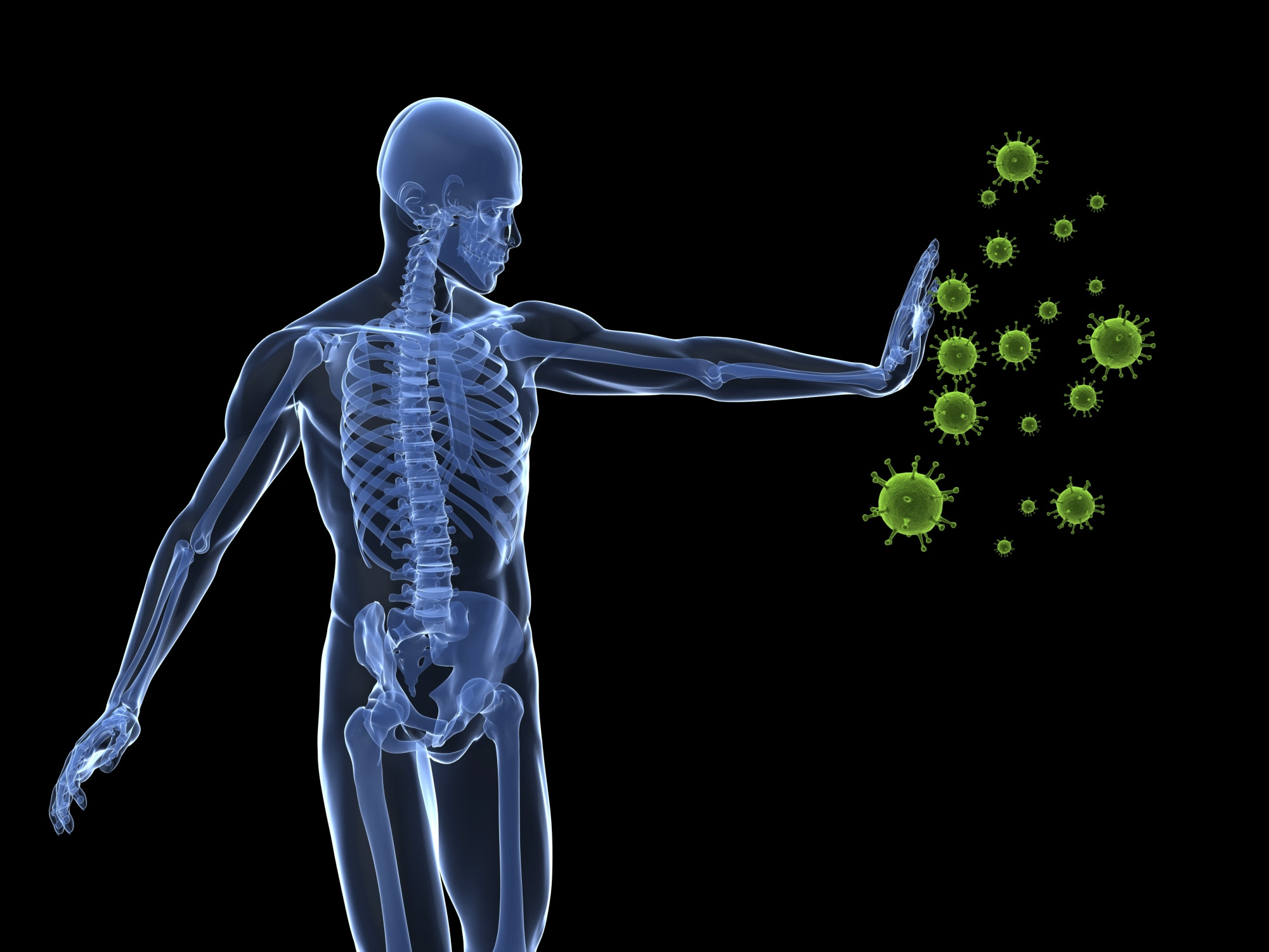 Immunity is our key to keeping dis-ease at bay, therefore we need to look after this system as best we can with food and supplements, especially at the change of seasons, namely winter, when the bodies defences can be down.  The immune system is a very complicated system with the body’s organs continuously working together whilst being attacked at all angles. Most people think that the immune system is just in charge of whether we get a cold or not, but many conditions are dependent on the health and integrity of this complex arrangement, from a common cold and recurrent infections, through to allergies and to severe, debilitating autoimmune conditions, therefore supporting the immune system is critical to good health. The best approach to encouraging immune function is a comprehensive plan involving lifestyle, stress management, exercise, diet, nutritional supplementation, and the use of plant-based medicines.

So what causes an immune reaction?
Most of the time it is the protein component of a virus, bacteria, food or foreign matter that causes an immune reaction in the body. There are many ways in which the body fights off disease and sickness, one of those ways is by the microflora that lives in our body.  These are our ‘friendly bacteria’ which mainly in the large intestine but which also live in the nose, mouth, stomach, small intestine, large bowel and genito-urinary system.  There are said to be trillions of these ‘friendly’ bacteria’ outnumbering our cells of the body and are responsible for 70% of the bodies immune. They play a huge protective role, and the cells from this system bind to and eliminate any bacteria, virus or foreign bodies. The gut is the biggest and most important immune organ in the human body, and if you think about gut flora, that is 90% of all cells and all genetic material in the human body, making us only 10%! If the gut flora is abnormal, the immune system becomes unbalanced and as a result it starts misfiring and reacting inappropriately to any proteins that come in. Proteins in our food are very similar to proteins in our bodies and an abnormal gut flora damages the gut wall making it porous and leaky (leaky gut). This sick gut is unable to digest food properly and so the undigested proteins slip through the gut wall. The immune system then send cells to attack these unfamiliar proteins, also finding similar looking proteins in the body i.e. organs, attacking these organs, and over time, this causes an autoimmune disease.
An imbalance of this system is thought to be the driver of chronic inflammatory conditions such as musculoskeletal disorders (osteoarthritis, rheumatoid arthritis), cardiovascular disease, cancer, neurodegenerative diseases (Alzheimer’s, Parkinson’s), and metabolic disorders (Type II diabetes, fatty liver disease, sleep apnoea). Inflammation begins in the body due to this imbalance, and produces an inflammatory cascade, causing the above diseases and symptoms in the body.

Another part of the immune system works by remembering the previous bacteria, virus or foreign body from last time they invaded, and is able to increase such cells that attack these enemies to form a stronger attack the second time round. This is how the majority of vaccinations work, they give you the tiniest amount of, or the dead cells of a disease, so that the body can recognise and remember the intruder disease/virus and fight it off, if you come into contact with it again. Unfortunately vaccinations such as the flu jab can be unreliable. This is because the flu virus is sneaky and has many variations, changing all the time to adapt to new surroundings, so that the body can not recognise the new virus and therefore is unable to fight it off as quickly.

The hygiene hypothesis
Babies are born sterile but receive their first mouthful of bacteria when they pass through the birth canal, and continue to populate their gut flora with colostrum and breast milk. If a mother is too clean and there is a lack of exposure to sufficient amounts of bacteria in the first year of life, this can be detrimental to a child’s health, causing food allergies, hayfever, skin complaints such as eczema or psoriasis, asthma or worse. It is said that we have become too clean and sterile so the immune system doesn’t have a chance to learn full competence i.e. doesn’t learn how to attack foreign objects and bacteria etc. Basically, the advice given today is that we should be letting our children eat the odd bit of dirt and banish the disinfectant from the toys and surfaces.

This is the burning question I get asked all throughout the winter, therefore I have decided to share my top 10 with you:

– Probiotics. Your gut is lined with trillions of ‘friendly’ bacteria called microflora and is responsible for 70% of your bodies immune system. Antibiotics, painkillers such as ibuprofen and paracetamol, and indigestion tablets will either destroy the bacteria or damage the intestinal wall, making it porous and ‘leaky’. Take a supplement daily from a reputable company such as Biocare, Solgar or Nutri, ensuring you have about 1-7 billion a day. Don’t be fooled by brand yoghurts that promise to contain friendly bacteria when they are really only full of sugar. If you don’t want to take supplements, you could repopulate your gut with products such as kefir, kombucha or sauerkraut which ferment, producing beneficial flora, and are delicious!
– Beta-glucans. These are naturally found in the cell walls of many plants. These work by kickstarting the cells that attack bacteria etc and have been proven to reduce tumour growth and prevent new cancer cells forming. Beta glucans also has good evidence for use in insulin resistance and high cholesterol due to their antioxidant function as a fibre from oats, barley and mushrooms. Mushrooms such as Reishi, Shitaki and Maitake are amongst some of the medicinal variety that have a strong immunomodulatory effect on the body, but even your common button mushroom eaten daily has been proved to activate the cells that kill disease.

– Omega 3 fatty acids. These can be found in oily fish such as salmon, trout, mackerel, sardines, anchovies and herring, it can also be found in flaxseed or chia seeds for vegetarians. Aim to eat 3-4 portions of fish a week and/or a tbsp of ground flaxseed and chia seed a day. These greatly reduce inflammation in the body.

– Garlic. During the First World War raw garlic juice was used as an antiseptic bathing wounds and helped to save thousands of lives. It’s antiseptic, antifungal, and antibacterial properties have been known to be a great preventative of coughs, cold and chest infections during the winter. Garlic works by making the cells of the immune system more active, contributing to the ability of the body to fight infections. It is also a prebiotic which encourages your gut to produce extra friendly bacteria.

– Ginger. A strong antioxidant, ginger is also anti inflammatory, antibiotic and can be used externally for an antiseptic and pain. The extract has been known to kill cancer cells. It is also known to combat chills and fevers.

– Curcumin. From turmeric, this yellow substance is a powerful anti inflammatory and antioxidant. It can help boost cell health by improving the behaviour of the membranes. They help improve the ‘orderliness’ of cell membranes, which in turn make the cells more resistant to infection and malignancy.

– Vitamin C and Zinc. Taken together, vitamin C and zinc have been proved to shorten a cold or flu virus if taken at the earliest onset. Aim for 1000 mg of Vitamin C and 15 mg of zinc, a day at the start of a cold and throughout.

– Belly laughs. Having a good old chuckle has been known to decrease stress hormones and improve the body’s infection-fighting abilities and overall resistance to disease.

– Echinacea. This herb was used in traditional herbal remedies by the Great Plains Indian tribes in the US. It was mainly used as an antibiotic until the western antibiotics were invented and then forgotten about until recently. Echinacea is now widely used to fight infections, especially the common cold, the flu, and other upper respiratory infections. Some people take echinacea at the first sign of a cold, hoping they will be able to keep the cold from developing. Other people take echinacea after cold symptoms have started, hoping they can make symptoms less severe. 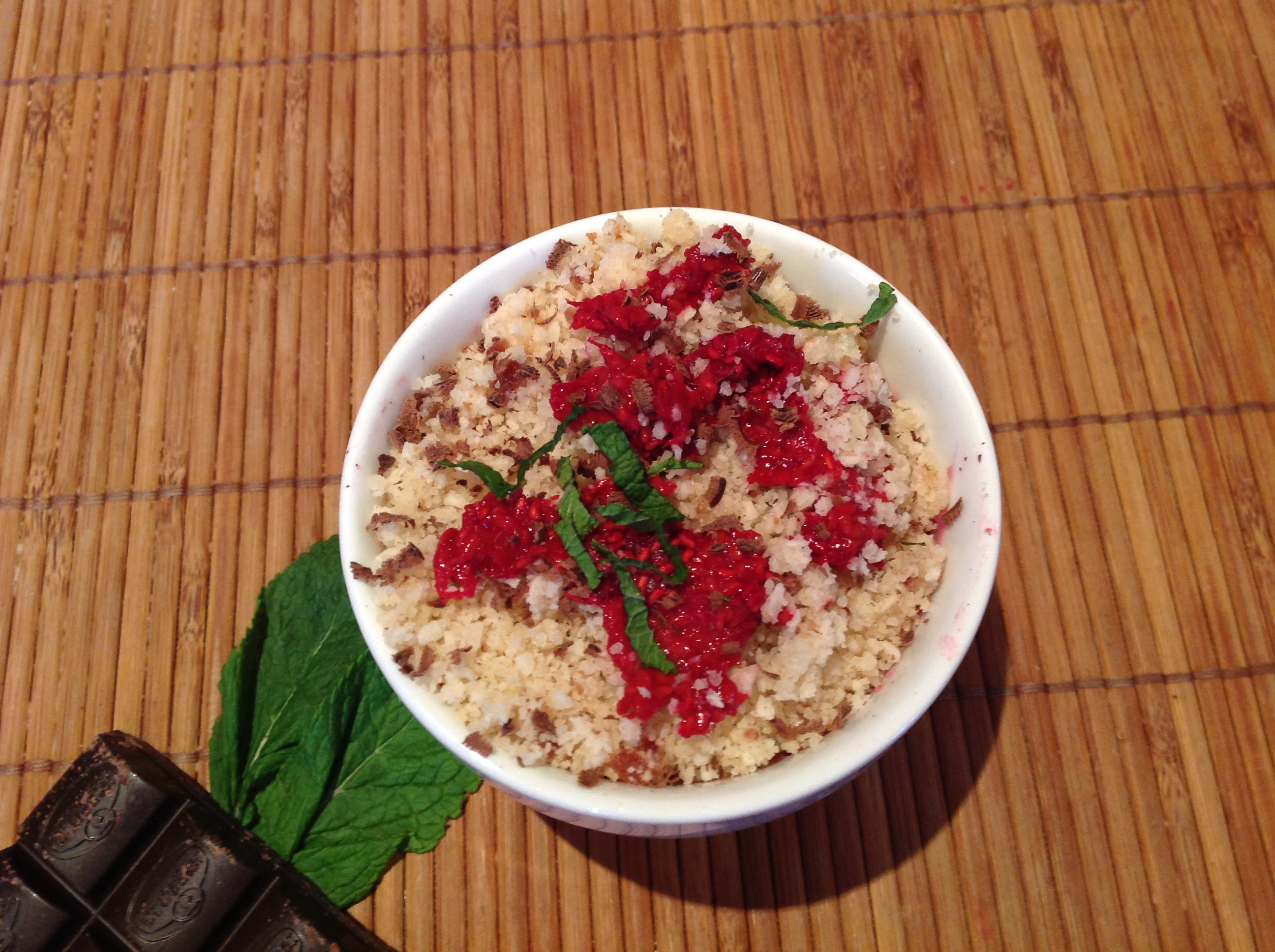 Crumble method
– Process the almonds and coconut in a food processor until broken up into a nice crumb.
– Add the dates, salt and vanilla extract and pulse until the mixture just comes together. Try not to over process as it can become too oily. Set the mixture aside.
Cheesecake
– Press the raspberries through a sieve and set aside the pulp. Preheat the oven to 50c or as low as it will go.
– Process the cashews, raspberry liquid, lime juice, salt, honey and vanilla seeds until the mixture is smooth and creamy. Add the coconut oil and process until combined. Pour the berry mixture into small glasses and refrigerate for a few hours, or until set.
– Spread the raspberry pulp on a lined baking tray and place it in the oven for a few hours. Remove, cool completely and chop or blitz the raspberry.
– Spread the crumble on top of the cheesecake, then the raspberry and mint to garnish and enjoy! I also grated some dark chocolate over mine.