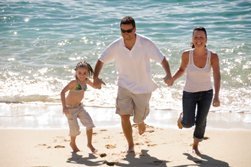 The Alliance of UK Chiropractors (AUKC) has launched a campaign to make people more aware about the importance of a having a healthy spine.

One of the chiropractors leading the AUKC’s Spinal Awareness Week campaign on 14-20 May is Donald Francis, a member of the UCA and an executive board member of the SCA. He explained: “Chiropractors look predominantly at the spine because that’s our chassis onto which we bolt everything else.”

“We find the bits in it that aren’t working as well as they can, and with our hands or specific tools, safely and gently mobilise them, in what we call an adjustment. So, by adjusting the spine, we enable the basic chassis to function better.”

He says we can be lulled into a false sense of security about our health: “We all think we’re fine, if we feel good or we look good. But if you ask anybody who has ever survived a heart attack how they felt the day before, they will say they felt fine. In reality, their heart attack didn’t just come out of the blue. So, it’s not just how you feel, it’s how you function.”

Before training to be a chiropractor, Donald was in the British Army and served in Iraq. He set up his practice in the Scottish Borders eight years ago. His youngest patient is four weeks old and the oldest is 92. He’s loving his second career and having the chance to make a difference to people’s lives: “I’ve got patients who have been with me for five years and they’re in their 70s and they’re healthier now than they were five years ago.”

“That’s partially due to regular appointments but it’s also due to the lifestyle advice we offer. If people listen to the advice offered by chiropractors, then they are allowing themselves the opportunity to get healthier and healthier.”

The AUKC has produced a video to explain how a healthy spine is essential for good overall health. Jonathan Clarke, a chiropractor based in Cornwall and an executive member of the UCA, said: “Our health is dictated by our body’s ability to adapt to external stress.”

“The analogy we’re using is that if we see our body as a kitchen sink, we can deal with a certain amount of stress without adverse effect, because we have a natural ability to deal with some stress and we have this big sink that we can fill.”

“But the tap continues to pour in external stresses and it will never turn off completely, so we’ll always be facing chemical, emotional and physical stress; thoughts, toxins and traumas. There are things we can do to turn the tap down and therefore limit our exposure to these stresses, but they never go away.”

The Five Pillars of Health

“The other tool in our kit is the plug-hole, the drain. If we keep a nice wide drain, then we’re constantly draining the stress away by appropriately adapting to this stress. The things that control the drain are what we call the ‘Five Pillars of Health’ – nutrition, exercise, rest, attitude and the function of our spine and nervous system. With those five in play, we are better able to adapt to the stresses that we all face throughout our life.”

One such example of this is former Scotland rugby international player Doddie Weir, who is receiving regular care with Donald Francis, following his diagnosis with motor neurone disease (MND) in late 2016.

Doddie, who played 61 times for Scotland, has been seeing Donald at his Galashiels practice for eight months and says he feels “a lot stronger” after his weekly appointments. He also says he has “seen a bit of growth” in his bicep muscles: “It’s been a great help to me, mentally and physically,” he said.

“From day one it’s been absolutely fantastic. It has identified areas within my body that I had to work on. Mentally also, it’s had a big impact. The ‘if you don’t use it, you lose it’ mentally has kept me strong and it’s kept the MND at bay – because I’m telling MND to get lost.”

Although chiropractic is not a treatment or cure for MND, by focusing on the function of the nervous system and the body’s ability to adapt to the day-to-day stressors, Doddie is noticeably better after receiving chiropractic care. Donald said: “That’s really important. We are improving the spinal function, so I am hoping – and expecting – that we can help him to have a much longer, happier life than if he didn’t have chiropractic care.”

The AUKC says this is a high-profile example of the impact of optimising spinal health. The organisation has several hundred members across the UK and globally.

The message of its Spinal Awareness Week is: ‘It’s not just how you feel, but how you function’. The aim is to encourage people to make lifestyle choices that will enable their body to work well, keep their nervous system functioning at its best, and to cope better with stresses that can often lead to health complaints both physically and mentally.

By addressing all the Pillars of Health, chiropractors are well placed to offer support, guidance and appropriate treatment to people of all ages to regain, maintain and avoid future health challenges: “Chiropractic isn’t the solution, it’s part of a solution,” said Jonathan.

Find a qualified, registered AUKC chiropractor in your area: